FAF is a framework for aggregating and analyzing reports of crashes and has never been easier to deploy it.

Why deploying own FAF

Firstly, standard users probably do not want to deploy own FAF - FAF is here to collect an enormous amount of crashes from lots of users. Deploying own FAF might be interesting for SysAdmins who control hundreds of machines. It also may be quite interesting on container platform such as OpenShift.

Watch this demo how to deploy and report into FAF quickly. 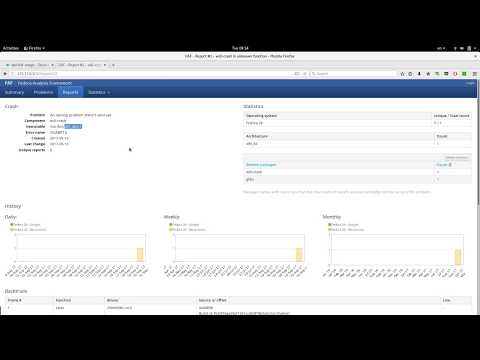 However you also probably want to mount volumes to /var/lib/postgres and to /var/spool/faf to have a persistent database and FAF’s data.

If you run FAF for the first time, then there is no database. You have to initialize it.

Then FAF is ready for use.

You can see incoming reports in web UI. It is accessible on http://<container_IP>/faf.

Also to send reports into your own FAF, you have to set up libreport on all machines, from with you wish to report into your own FAF. To do so, open a file /etc/libreport/plugins/ureport.conf and enter here:

For servers, you may want to enable automatic reporting. Those reports are called μReports. Run:

This image is ready to accept reports from all active releases of Fedora.

To add a new version of the already supported system you run:

You can even write a plugin for own OS. Once you wrote this plugin and installed it, you can enable it using:

A problem that happened in C/C++ code comes to FAF in the form of build_id and offset. However, for users, it is much more suitable to have file name and line. For better understanding, please see following two images, both describing the same report.

Only with build_id and offset:

With filename and line number:

The process of transforming build ids and offsets to file names and lines we call retracing. To be able to do that, we need packages, from which these crashes come.

For retrace.fedoraproject.org we have all Fedora packages stored locally. It consumes several TB of storage. This Docker image does not download any packages and therefore does not retrace any symbols. Note that this only affects compiled code, so for example, python unhandled exceptions are not affected.